I started playing with my key files in order to encrypt and secure them, I don't want my ZeroNet account to fall in malevolent hands and I'm mainly referring to those of a thief.

I decrypted my keys into a folder and then sym-linked to zeronet/data so I started using the platform as usual without hassles… But starting from the second time I activated the service, after a reboot and forgot the first time to un-encrypt, something started to go wrong… indeed, I was unable to like stuff, comment and act as usual getting errors like this one directly on the GUI:

and I've found just now watching at the logs on the CLI, this:

I've been a couple of days off because of this inability to operate as myself… I've tried to double check permissions, substituted keys with the previous ones from the backups, took searches, updated ZeroNet… until I remember that my ZeroNet data folder was on the periodic scheduler of snapper, so I just run the command btrfs -c (name of the config) undochange (oldsnapshot)..0 and everything came back to normal :)

So I must thank Open Suse's snapper software for the success of my rescue mission! : )

This is how I've been able to handle the casualty! ^^ and I suggest you doing snapshots too, sometime unexpected things occur and these are a life saver :3

Oh… and in the meantime, I big failed in my attempt to save the blog draft and published as an empty post instead! as @leftside let me notice XD 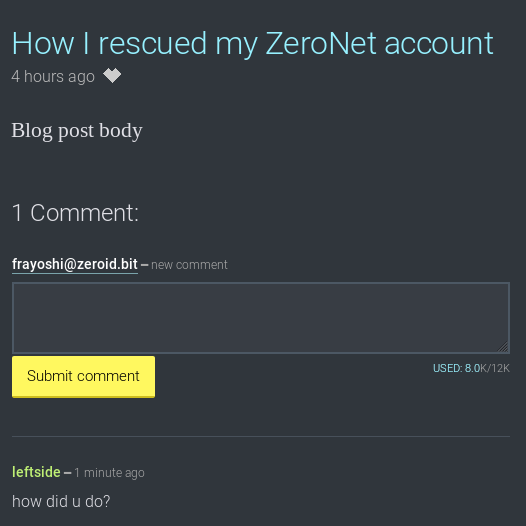 Ever happened something similar to any of you?

Have you wrote a blog about? If you did, I'd love to read about your experience and how you solved it! ^^